the (second) time i met justin bieber in zurich 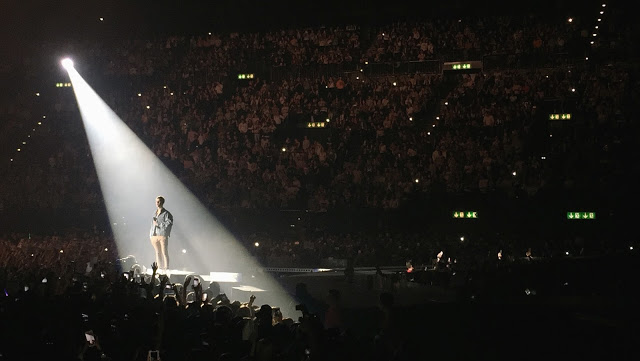 Today I want to tell you all about my two absolutely wonderful days in Switzerland, which are definitely a highlight of this year, if not of my life. Read everything about the concert in the first part, and in the second, how I met Justin Bieber in Zurich at his Hotel. By the way, you can read the post of my first meeting with Justin Bieber at the Meet & Greet in 2011 here.

Well, last Thursday was the Justin Bieber concert in Zurich – by the way, that was the fourth concert of him I ever went to. I first slept in and then put on my “Purpose Tour” outfit. This consisted of a beige Justin Bieber tour shirt, a white Tally Weijl skinny jeans, my Vans x Stussy and a Supreme shoulderbag. As it was cold, I naturally wore a coat, cap and sweater outside – but that does not really fit into the concert outfit for me. In addition, I put on make-up and tried out for the first time an eyeliner / eye shadow template. This was pretty bad at first, but then I was able to bend it that it looked pretty good. I have to practice this again, because actually it is really faster. In any case, I went to Bettina at three o’clock and unloaded my sleeping clothes – as in the good old days we wanted to make a sleepover after the concert. At half past five we went to Oerlikon and went to Mc Donalds first, as we were both quite hungry. When we had eaten our delicious chicken nuggets, we went to the Hallenstadion.

We came right to the door opening and lined up at the membercard entrance. After about 15 minutes we were already in it and I first bought more merch. I went for a cap in white where “Purpose Tour” was written on it in purple. Later we went to our seats and found out that they were in the first row (of seats.) We knew these were at the bottom of the seats but on the Ticketcorner map they were not so far down. Of course we totally freaked out, I felt like I was 15 again and in my fangirling phase. The opening act was “The Knocks” and they were really good, but I found Carly Rae Jepsen better who was the opening cast last time, to be honest it was more fun with her.

When Justin Bieber came on stage my heart slipped in my pants and I was so happy I could have cried, but I pulled myself together and just sang along. In the middle of the concert there was a break of about 20 minutes, in which probably another French band was supposed to come, but they did not make it. As far as I know, a few things were lost from their equipment. Anyway, the show was blatantly good! It was a pity that there was so much playback. But if you think about how much he danced, that was okay. I mean, let’s be honest, no one can dance and sing, that just does not really work. Anyway, I was thrilled with this concert and I’m really looking forward to the next one. 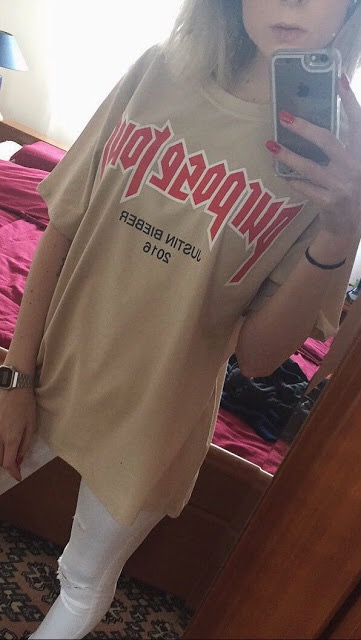 My outfit for the concert.

We set the alarm clock at 7:20 am and actually wanted to get up at the time and drive to Justin’s hotel. However, the weather was very bad, nobody knew for sure if Mr. Bieber was still in Switzerland at all and we were so tired from the day before. So we stayed in bed and chatted until it was noon. When we made breakfast, we heard on the radio that Justin was being talked about and that some were standing in front of his hotel. Since we only wanted to watch films in the afternoon anyway, we decided to go there and set ourselves in a record time of 15 minutes (we were still in pajamas at the time) ready to go. We got on the train, picked up some Starbucks, and then headed straight to Justin Bieber’s hotel. We arrived just before 4 pm and the weather was still terrible. 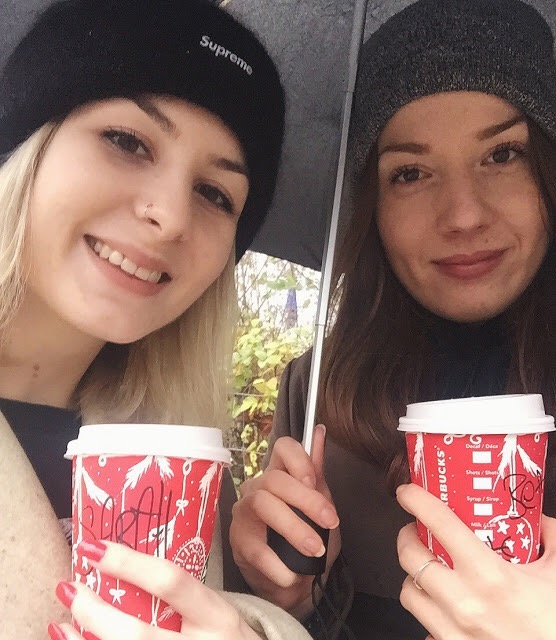 Some fans / Beliebers were already waiting for him, but many disappeared about half an hour after we arrived and probably gave up waiting for him. Two remained and with them we began to talk. At some point a third girl arrived and as it started to rain heavily we decided to drink a warm chocolate at the hotel. There we met two more fans (yes, yes, we got more), which even took a room in the hotel to be close to their idol. We waited and waited and more girls came. One noticed correctly that the Securitays and the hotel staff wanted to throw us out, but did not know how, because we constantly ordered something. Anyway, we waited until about 11 pm, most girls went home then. There were only Bettina, me, two German girls and those who took a room there.

The wait is finally over

Shortly before midnight, we suddenly heard someone playing the piano inside (we were sitting outside on the terrace). We went in and there he sat, Justin Bieber – he looked so beautiful and sang / played even more beautiful. I stopped like petrified and just watched him singing. Unfortunately, the hotel staff said we should stay in the back area. Anyway, we listened to this angelic voice and it was indescribable, by the way, there were only six girls and his crew in the room – and of course some people of the staff. When he finished singing his Freestyle songs, he greeted the two girls with the room, who were sitting in front and then went back to his people. The room girls (I just call them like that) went to the bar and Justin sat down again to the piano. We listened again spellbound and I was completely happy. He kept talking to his crew, it looked to me as if he had a new tune for a song in his head.

When he was done, he stood up and dabbed, we four who were still there in the back had to laugh and then he noticed us the first time really. He said hello to us and asked how are we. He came over to us and asked what we were doing here, then he asked for our name and shook hands with us. Unfortunately, we were not allowed to take pictures at all, but that did not matter to me at this moment because I know that it happened and I will never forget it – I already have a photo of the Meet & Greet 2011 so it was just okay. Since we do not want to look like groupies, we I did not ask for anything stupid or hugged him (even though I kind of liked doing that).

He then said that he would like to have a look at the bar and when one of the Germans asked if we should come, he said no. He looked very tired and a little drunk, so it was understandable that he just wanted his peace. I was just thrilled that he came over to us, that was more than I expected. A guest, whom we met during the waiting time, was at the time as Justin was in the bar also there and said to us that he just sat in front of the singer and listened to her performance. When Justin came back, he picked up his shirt and probably showed a man his new tattoo, which he had stung in Zurich. It was under the chest a lettering with “son of god”. Justin left the lobby shortly afterwards, came back 10 minutes later, went to the reception and told them something. Then he disappeared to his room, I think he went to sleep.

Even though it was short and he did not feel like talking to us for a longer time,  it was the best day I ever had (besides Disneyland with Tristan, that was a dream too and of course the meet & greet und some moments with my family). We spent almost the whole night with his crew and talked about so many things! 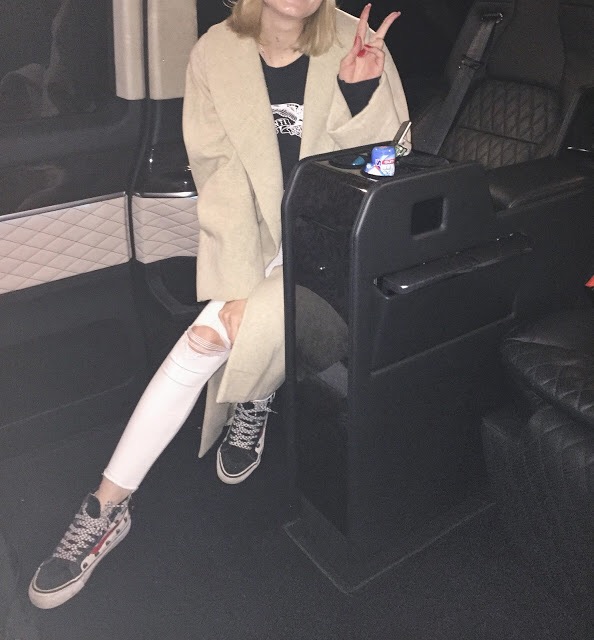 Me, in Justin Biebers car.

I can completely understand it, if some of you now think that I’m completely stupid. That’s okay for me, I met my youth idol for the second time and it was really special for me. By the way, for those who are like me, I have a tutorial on how to make a wonderful Justin Bieber Fan Shirt very easy and cheap by myself (click here for the post).
dolderidoljustin bieberkonzertprivat konzertpurpose tourzürich
0 comment FacebookTwitterPinterestTumblrEmail